We continue our 50th anniversary look at that most pivotal of years, 1968, with a story from David Pogue about something very small that plays a very BIG role in our lives:

In many ways, 1968 is famous for its tragedies: assassinations, conflicts and war. But 1968 also gave birth to something amazing: the era of fast, cheap, ubiquitous electronics. Because 50 years ago this week, two middle-aged engineers quit their jobs to start a new company called Intel.

"In 1968, Gordon Moore dropped by Bob Noyce's house; Bob was mowing the lawn," said Intel archivist Elizabeth Jones, who runs the Intel Museum in Santa Clara, Calif. "They were discussing the state of their current jobs as well as the possibility of a new industry." 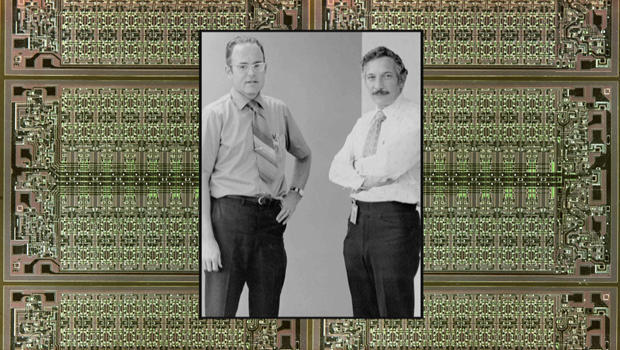 Gordon Moore and Robert Noyce, the co-founders of Intel.

At his previous company, Fairchild Semiconductor, Noyce had co-invented the integrated circuit – a way to etch all the circuits in that era's room-size computers onto a tiny slice of silicon.

Intel's first product, a memory chip called the 30101, was released approximately nine months after the company was founded.

And before that, how did they make memory? "I can't even call it a 'chip,' this larger device called core memory," Jones said. "And that was the standard computer memory in the 1960s."

The Intel plant near Portland, Oregon, one of the company's oldest, is what a chip factory looks like today. No TV crew has ever been allowed inside before. 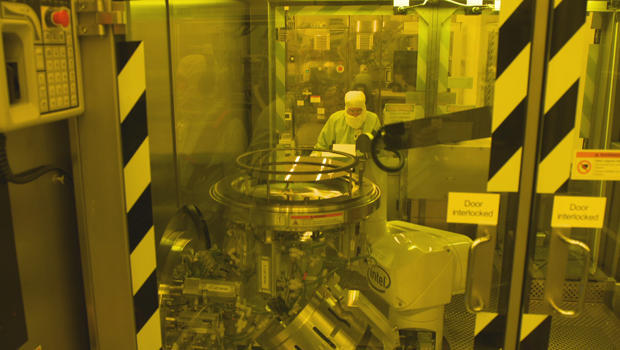 Aicha Evans, Intel's chief strategy officer, showed Pogue how to put on the so-called "bunny suit." "We don't want any contamination," Evans said. "We want maximum purity as the material is being assembled, and the products are being built. This is absolutely key."

Each shiny round slice of silicon holds about 500 identical chips, which will be cut apart and installed into the microprocessors (the electronic brains) that control just about everything in our lives with an "on" switch.

A disc of computer chips.

Each chip is etched with impossibly small channels of circuits only ten-millionths of an inch wide. The work is done not by Swiss watchmakers with magnifying glasses, but by robots.

So, how has the manufacture of silicon chips changed in 50 years? "The basic principles and fundamentals haven't changed at all," said Evans. "Just a lot more automation, a lot more complexity, and also more layers."

"And that's to get more circuitry into less space?"

Getting more circuitry into less space is the whole point of Moore's Law. That's the prediction, made way back in 1965, that every 18 months we'd be able to double the amount of circuitry that can be crammed onto a chip.

He's basically been right, for all 50 years.

"Moore's Law is actually not a law of physics; it's the result of tens of thousands, hundreds of thousands of people making ongoing improvements in reducing the width of these lines that are printed on the integrated circuits," said John Doerr, who started working at Intel in 1974. Today, as chairman of Kleiner Perkins, he's one of the world's most successful venture capitalists.

"Someone once said if this applied to automobiles today, cars would cost a few pennies, they'd get thousands of miles per gallon, and we wouldn't even remember where we parked them; we'd just leave them there again and get another one," Doerr said.

In the beginning, Intel made computer memory – chips for storing information. But things reallytook off in 1971, when Bob Noyce invented microprocessors – chips that could process information.

And then, IBM came along. "IBM chose to base its personal computer on Intel's architecture," said Doerr.

"And had IBM chosen some other company's chip?" asked Pogue.

Bob Swan, Intel's current interim CEO," told Pogue, "The makeup of the company started with the founders. And they said these simple words back 50 years ago: 'Don't be encumbered by the past. Go and do something wonderful.'"

"There's another saying that's associated with this company, which is, 'Only the paranoid survive,'" laughed Pogue.

"We're always looking, always worried, always curious. Who's doing something else? And if we're not worried about them, they will catch up to us."

It hasn't all been smooth sailing. The company famously missed the boat on making the processors for smartphones like the iPhone. Then, as PC sales began to slip, Intel had to lay off thousands of workers over the years.

But today, Intel says it is determined to be ready for whatever comes next. The company is investing in self-driving cars, artificial intelligence, and other futuristic tech, like drones.

A week ago, in honor of Intel's big birthday, his team set a Guinness world record: More than 2,000 drones, whose LED lights formed stunning images in the night sky. And very single one of them contains a tiny rectangle of etched silicon, like the ones designed by Bob Noyce and Gordon Moore, half a century ago. 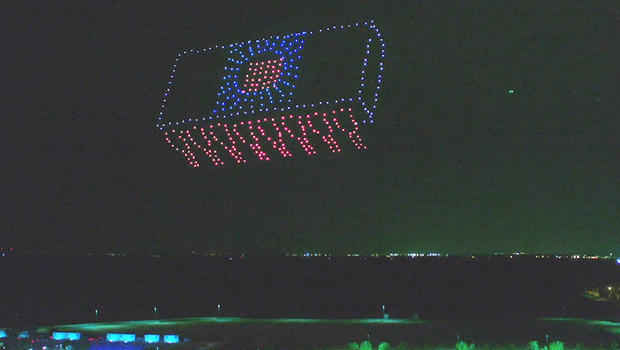